Christians in the Mirror

Christians in the Mirror: Stories of Courage and Faith in the Face of Persecution From Syria, Iraq, India, Sudan and Egypt reveals the intense suffering of persecuted Christians around the world.

From the demolished streets of Aleppo, Syria and northern Iraq, to rural villages in India, South Sudan and Egypt, Christians in the Mirror, tells stories of not only unbelievable persecution, but also the inspiring faith and fortitude Christian communities have displayed in the face of so much devastation.

All religious minorities, especially Christians, in the Middle East and Africa are targets of violent Islamic radicals, whose ideology seeks to annihilate. Political and religious sectarian violence threaten Christians, suffering for their faith through marginalization, persecution, loss of homeland and churches and families, or even their own martyrdom. Persecuted Christians seek greater solidarity and support from Western churches, who are a source of hope for them.

“If one part suffers, every part suffers with it.” (1 Cor 12:26) Christians in the Mirror deepens the existential reality that when members of the body of Christ are left to wither, the whole body suffers fragmentation. The Christian faith persecuted in one region affects the universal church; every Christian by extension is suffering it, realized or not. The greatest suffering is one that is not even known, one of identity that rests at the core of our faith.

Documentary is co-produced by Joshuacord, Inc. and In Altum Productions. 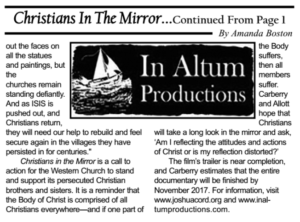